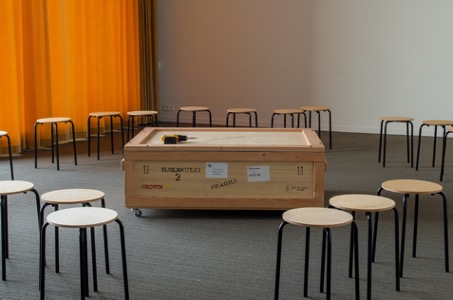 Tlön Projects invites curators, artists, authors and thinkers to enter into a dialogue with and develop innovative, noteworthy presentations of works on the basis of their imaginary collection or “museum without walls” at different locations. French artist Béatrice Balcou (1976) will select an as yet unknown work from the collection in the context of a ceremony as well as presenting new works from the series Porteurs and Containers which she made in 2020.

Béatrice Balcou’s works are well thought-out exercises in attention – that increasingly scarce and yet, oh so precious of human capacities. Over the years, she has developed an oeuvre that purposefully explores the boundaries between art and framework. Since 2013, Balcou has been working on a series entitled Untitled Ceremonies, performative actions that take place around an existing artwork from a public or private collection. The work in question is carefully unwrapped and re-packed in the presence of a limited audience as part of a gestural choreography that focuses attention on the work’s concrete materiality [i]. During Balcou’s secular ceremonies the works are declaimed as it were; they are – temporarily – released from the obscurity of the collection and revealed to an audience. There is phenomenological pleasure to be had from the way the work’s meaning is divested of every utility or exchange value solely by interacting with it [ii] as well as how it declares its independence from every economic framework before it is returned to storage. The same applies to Balcou’s series of placebo sculptures (2014 – present), wooden replicas of artworks featured in ceremonies. These wooden objects originally served as substitutes or props for rehearsing the ceremonies, yet have slowly, but surely demanded autonomy.

[i] Simultaneously, it is an echo of the often overlooked professional art handling practice.

[ii] “Gesture is the name of this intersection between life and art, act and power, general and particular, text and execution. It is a moment of life subtracted from the context of individual biography as well as a moment of art subtracted from the neutrality of aesthetics: it is pure praxis. The gesture is neither use value nor exchange value, neither biographic experience nor impersonal event: it is the other side of the commodity that lets the “crystals of this common social substance” sink into the situation.” Giorgio Agamben, Means Without End. Notes on Politics, tr. by Vincenzo Binetti and Cesare Casarino, Minneapolis: University of Minnesota Press, [1996] 2000: 79.

A ticket for attending a performance is required.

You can book a ticket here: satellite.eventgoose.com