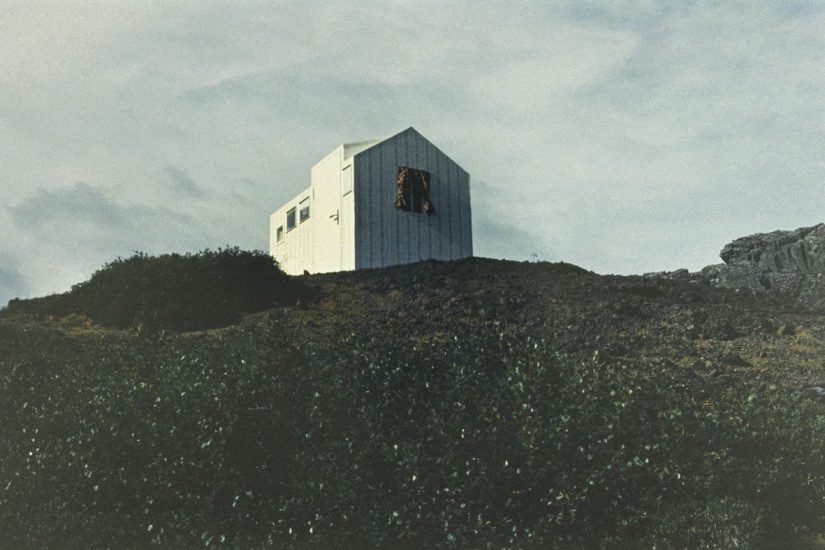 In 1974, through an ephemeral gesture, Hreinn Friðfinnsson claimed the whole universe within the site of a small house, turned inside-out, in the middle of an Icelandic lava field. Encountered only through happenstance or hearsay, a timeless lore grew around the house. House Project became a resonating series of works, appearing in multiple iterations, inversions, and reductions in form.

Cassandra Edlefsen Lasch will speak on Friðfinnsson’s House Project (1974–) in the vein of her essay “A Theorem of Inversion” written for the monograph Hreinn Friðfinnsson: Works 1964-2019 (London: Koenig Books, 2019), which took the ongoing work as its focus. Viewed through multiple lenses, such as quantum physics, her talk will propose the work as a lens itself. In this light she will also touch upon the publication homecomings 1, 2, 3, etc. (Berlin: Archive Books, 2018), which culminates a three-year co-curated group exhibition and symposium series of the same name inspired by Friðfinnsson’s House Project (1974–) and author Georges Perec’s Species of Spaces (1974).

Annabelle von Girsewald will visit each iteration of Hreinn Friðfinnsson’s House Project from the prospects of the ideal, real and desire. How do his houses frame the meaning of ‘home’? How are notions of identity reflected in the house project? In 2005 Annabelle curated her first three part exhibition series in her apartment – “home is where the heart is”, “home is where the hurt is” and “homing desire”. The series was inspired by NOI♀SE: Network Of Interdisciplinary W♀men’s Studies in Europe summer school “Diasporic Identities and Mediated Cultures: Gender, History and Representation” which took place at Utrecht University 1999.

Cassandra Edlefsen Lasch (1984, USA) is a curator, editor, and writer based in Berlin, focused on the role of the editorial—processes of rereading—within artistic practice at large and at length. She holds an M.Litt. in Contemporary Art History from the University of Glasgow and a B.A. in Art History with minors in Political Science and Psychology from Santa Clara University, California. She has managed global publications with Hatje Cantz, served as Founding Editor at PRAXES Center for Contemporary Art in Berlin and within Bergen Assembly 2016, and liaisoned on behalf of international artists with the gallery neugerriemschneider in Berlin. The publication homecomings 1, 2, 3, etc. (Berlin: Archive Books, 2018) culminates a three-year co-curated exhibition and symposium series of the same name inspired by artist Hreinn Friðfinnsson’s House Project (1974–) and author Georges Perec’s Species of Spaces (1974). Her essay “A Theorem of Inversion” took House Project as its focus within the monograph Hreinn Friðfinnsson: Works 1964-2019 (London: Koenig Books, 2019). Recent and forthcoming publications under her editorial management include: Boris Buden, Transition to Nowhere: Art in History after 1989 (Berlin: Archive Books); Susanne Kriemann, Ge(ssenwiese) and K(anigsberg): Library for Radioactive Afterlife (Leipzig: Spector Books); Florian Neufeldt, Folds and Faults (Berlin: Distanz); and with editor Rhea Dall, Tempo Tempo Tempo (Oslo: Kistefos-Museet, 2019), and Wilhelm Sasnal: ENGINE (Oslo: Kistefos-Museet, 2018).

Annabelle von Girsewald (1972, USA) is an exhibition maker, tour manager and art agent based in Berlin, Reykjavik and Sarasota. She obtained her M.A. in Empirische Kulturwissenschaften and American Studies from the University of Tübingen and her B.A. in Women’s Studies and Art History at the University of Wisconsin Milwaukee. Her academic ‘home’ themed shows started in her apartment in Frankfurt am Main 2005. She has been working with the Icelandic conceptual artist Hreinn Friðfinnsson since 2010. Recent projects include Earth Homing: Reinventing Turf Houses and Terminal Exhibitions. Terminal is an ongoing series of an exchange of Icelandic artists in an in between state of transit. She is currently developing Terminal Exhibitions in collaboration with the International Lunar Exploration Working Group, Institute of Earth Sciences Iceland and Universität der Künste Berlin.