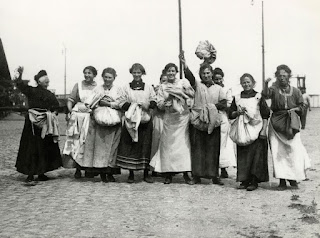 May 5, 18.30:  talk about the project Onze Roeping, on Joyful Militancy

Together with archivist and If I Can’t Dance curator Anik Fournier and Rozenstraat curator Sjoerd Kloosterhuis, Mercedes Azpilicueta will share parts of the process in preparation for the performative walks in July and try to answer questions such as, what are the affective elements lying underneath the Aardappeloproer, if we consider that ‘tenderness and vulnerability can thrive alongside these militant commitments? And why is joyfulness an important part in these political commitments?

Alongside these questions the conversation will also look deeper into the architectural and material conditions in the Jordaan where this matriarchal organisation was born as well as the aesthetics and imaginaries of representations of women in uprisings such as Ni Una Menos where Mercedes has been taking part since 2015 and in the Jordaan in the aftermath of the riots.

Women have fought several times in history for the rights of the working class, despite the engendered assumption that they had no contribution to society besides their capacity – and often the obligation – to procreate. During critical situations such as the World Wars and the Spanish Flu, where the scarce resources were distributed to the ‘productive’ part of the population, women stood up and formed a collective body performing a strong political gesture of care. The resulting jolt was an encouraging example of solidarity and hope for the part of the population facing repression and lack of social justice.

With a focus on the Aardappeloproer (1917), one of the leading historical revolts of the early 20th century, the research will examine the importance of these movements in promoting solidarity and answering questions such as: What are the affective elements lying underneath this event, if we consider that tenderness and vulnerability can thrive alongside these militant commitments? How have domestic economies evolved and what is the role of the public space in it? How did the daily private discussions between women become slogans and street songs in upheavals, making visible what has been silenced? How can an individual body become plural when performing? How can a collective movement keep the intimacy of a domestic relationship? The trans-historical approach of public interventions and women’s activist militancy, today relevant more than ever, reflects on current social movements and grass-root feminist initiatives such as #NiUnaMenos ‘No One [Woman] Less’ in today’s Argentina.

Onze Roeping, on Joyful Militancy is initiated by ROZENSTRAAT curator Sjoerd Kloosterhuis and Mercedes Azpilicueta in 2019 and is developed in close collaboration with Mieke Krijger, director of the Jordaan Museum.

Mercedes Azpilicueta is a visual and performance artist from Buenos Aires living and working in Amsterdam. Her artistic practice gathers various characters from the past and the present who address the vulnerable or collective body from a decolonial feminist perspective. In fluid, associative connections she counters rigid narratives of history in an attempt to dismantle them and make room for the affective and dissident voices to emerge. Mercedes was an artist in residence at the Rijksakademie van Beeldende Kunsten, Amsterdam in 2015-16, and received the Pernod Ricard Fellowship in 2017. Solo exhibitions include ones at Gasworks, London (2021), CAC Brétigny, Brétigny-sur-Orge (2021), Museion, Bolzano/Bozen (2020), CentroCentro, Madrid (2019), and MAMBA, Buenos Aires (2018). Mercedes was nominated for the Prix de Rome 2021 for which she made a large scale installion with the research for Onze Roeping, on Joyful Militancy as starting point.

Onze Roeping, on Joyful Militancy is supported by the Amsterdam Fund for the Arts.

Many artists feel the need to establish a long-term connection with a curator or institution in order to develop different presentations over a longer period of time. With R Projects ROZENSTRAAT wants to further focus on sustainable support for artists based in the Netherlands, in the field of research, development, production and presentation. ROZENSTRAAT wants to create a context of trust in which artists can take new steps in their work. At moment this happens with Mercedes Azpilicueta (AR, 1981) who for the first time develops an intervention performance in public space in cooperation with ROZENSTRAAT. Collaborations have also begun with Thierry Oussou (BJ, 1988) and Buhlebezwe Siwani (SA, 1982). Often the research, and the resulting projects, focus on subjects that are not previously explored by the R Projects artists, and that have a strong local character. R Projects are mostly (slow curated) projects that connect to Amsterdam and whose presentations partly take place outside ROZENSTRAAT, often in the form of an intervention or performance. For this reason, ROZENSTRAAT enters into various partnerships with institutions inside and outside the art world, such as the Amsterdam Municipal Transport Company or a housing association, but also with the Jordaan Museum, historians and anthropologists. During their research, the participating artists organize various activities, such as talks, screenings or small presentations, around the subject of their research which may or may not take place at ROZENSTRAAT, or at other partners.