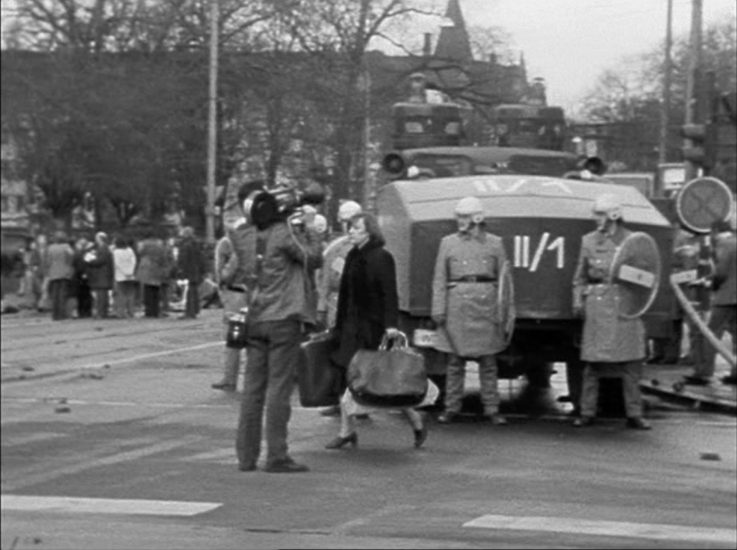 Rozenstraat is happy to announce a series of events that will be developed with Amsterdam based artist Zachary Formwalt. Formwalt is developing a project in which Amsterdam’s monumental social housing projects from the 1920s are seen as contemporary ruins in relation to their original function as well-designed affordable housing for the proletariat. Though physically in tact to this day, they are no longer affordable for the class of residents by and for whom they were originally built. Listed as national monuments, historical preservation considers their physical construction to be of value, while turning them away from their original purpose. As cultural artifacts, pointing to a bygone era, they have become too valuable, like much of the city, to be inhabited by its own residents.

The first event will be a screening of Alexander Kluge and Edgar Reitz’s 1974 film In Gefahr und grösster Not bring der Mittelweg den Tod (In Danger and In Deep Distress, the Middleway Spells Certain Death), which looks at the transformation of Frankfurt in the 1970s, through a mix of footage documenting police actions, evictions, protests, and interviews, while developing a set of characters passing through all of this. At certain moments, the setting, the events underway in the background displace the leading roles of the actors who find themselves in what Kluge refers to as the “public sphere of cinema.”

Zachary Formwalt has presented solo projects at the National Museum of Contemporary Art of Seoul; Salon of the Museum of Contemporary Art Belgrade; Stedelijk Museum Bureau Amsterdam; VOX Centre de l’image contemporaine, Montreal; Casco—Office for Art, Design and Theory, Utrecht; Wexner Center for the Arts: The Box, Columbus, OH; and Kunsthalle Basel. His latest video Hoog Catharijne and its Models (2019) is currently on view as part of the exhibition Dromen in Beton at Centraal Museum, Utrecht.