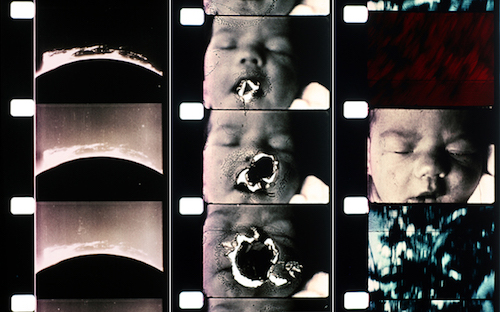 During the six years this collection has been selected from, Stan Brakhage deranged the silver screen, bursting cinema wide-open with new possibilities of expression. Standardized Hollywood narratives were not necessary to express ecstasy, intimacy, the magic of cinema, poetry, and the delicacy of human contact. All a person needed was a simple movie camera and a profound vision. Brakhage used his movie camera like a paint brush. Still today, he remains one of the crucial avant-garde filmmakers of the American underground art scene. His experiments were bold and exploratory, constantly on the lookout for new landscapes and vistas, refusing to repeat his past successes. During the course of his life he made nearly 400 short films.

I (Jeffrey) am screening this collection of films in relation to the Michel Cardena exhibition that is being held currently at the Rozenstraat Gallery called: A Rose is a Rose is a Rose. Both the Colombian-Dutch Cardena and American Brakhage were experimental artists that were pushing the boundaries of creativity. But they were also artists that were thematically tapping into the everyday life and intimacy. Both of their visions imploded the grand themes in art, and brought things back home again by focusing on everyday life and situations. They both also fought the cold-hearted dimensions of the art world, by introducing a new level of intimacy. For example, Stan Brakhage created with whatever happened to be in his living environment, for him this was the stuff that dreams were made of.

All films are silent, and will be projected in high-definition.