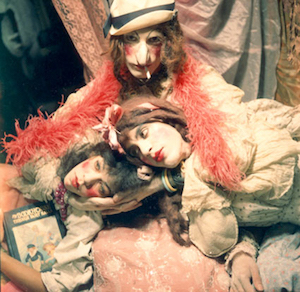 This is a great documentary portrait about one of the most profound artists of the last century. Jack Smith was simultaneously hailed as the founding father of performance art, was critically recognized as a master photographer, and was one of the most revolutionary filmmakers of his day. He had a huge impact on the modern art world, though most people today have never even heard of him.
At the tender age of 20 Jack Smith left home and went to NYC. During the late 50s he started with photography but soon found himself involved in avant-garde theatre. This lead to his work in cinema where he could let his fantasies run wild. Smith created his own deranged world of trash-baroque aesthetics, and they featured heavily in his incendiary Flaming Creatures, a film (described as a ‘a comedy set in a haunted movie studio’) which broke the censorship laws and was banned throughout America. But although Flaming Creatures was famous, no one was allowed to see it… and although Jack’s performances were notorious within the art world, he himself was living in utter  poverty. This film is a great collection of interviews with people that knew him, mixed with archival footage and narrated with audio recordings that Smith made just before he died.

His legacy can be seen in artists like Andy Warhol, Nan Goldin, Mathew Barney, John Waters, performance artist Paul McCarthy, even Federico Fellini, David Lynch, Cindy Sherman, Robert Wilson, Laurie Anderson, etc. The list of artists that acknowledge his influence is endless. One critic has stated ‘Jack Smith is the hidden source of practically everything that’s of any interest in the so-called experimental theatre today.’

As Nayland Blake states: “So many contemporary artists trace their practice back to Warhol at this point, and a lot of the important ideas in Warhol come from Jack.” John Waters says: “He did it all first. He started something that other people took and became more successful with.” Musician John Zorn puts it more bluntly: “Jack Smith was the real Warhol.”

This is a multi-faceted documentary featuring interviews with John Zorn, Jonas Mekas, John Waters, Sylvere Lotinger, Tony Conrad, Mike Kelly, George Kuchar, Robert Wilson and many others. This film is an absolute must for anyone interested in contemporary art or poetic cinema….so hope to see you there!

A one-hour visual odyssey that takes place on a white desert expanse, featuring Nico (chanteuse of the Velvet Underground). This not “normal” cinema at all, what we are talking about here is a film that is composed of mysterious images and little dialogue. The soundtrack is mostly the source for Nico’s own album called Desertshore.

This film, which translates as “The Inner Scar” is an abstract depiction of the inner torment that is caused by painful relationships. Claustrophobic, intense and unforgiving. This “composition of symbolic, surreal and almost mystic images” stars Pierre Clementi, director Philippe Garrel himself, Nico and her son Ari Boulogne.

One viewer’s reaction: “In some ways this is Nico’s film. She wrote the script, has a central role in the film, and provides about half of her songs from her album Desertshore, as soundtrack. She looks, as always, stunning. The main star of the film is not human however – it is the landscape. Garrel has filmed his story in a wide range of deserts. Hot sandy deserts, cold glacial deserts, hot rocky deserts, hot lava deserts in a cold environment. Earth, fire and water (often in the form of ice) are very much at the centre of the film. This return to the elements, to the absolute basics of being, provides a platform from which a narrative evolves.“