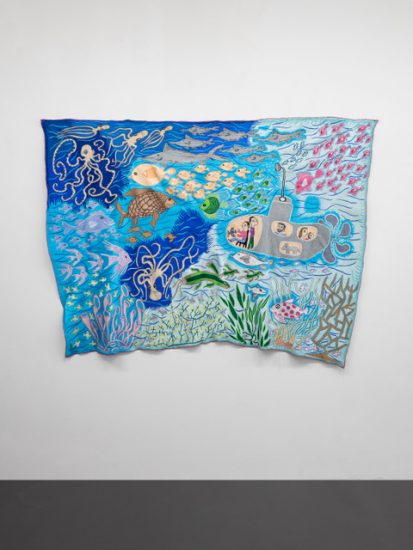 In Rosebud #5 we happily present three works on paper and one tapestry in succession by Jakup Ferri (1981, Kosovo)! In line with the series’ approach, we show existing works that deserve to be seen (again).

Animals, musicians, seemingly ancient symbols, strangely familiar decorative patterns and enigmatic constellations build up Ferri’s compositions. Some have an almost byzantine appearance. Others reveal a clear interest in folk- and outsider art. Although completely sprung from the artist’s imagination, the figures that show us festive activities or traditional events may well be a documentation of an unknown culture. The works, that were on show until the end of May, are part of a series of mosaic pieces, meticulously crafted with small pieces of used paper. Industrial waste thus becomes a little piece of color in these works, gaining a completely different function while masquerading as small stones. The tapestry, which will be presented from June 17, depicts a colourful fantasy underwater world.

Jakup Ferri studied at the Prishtina Academy and the Rijksakademie in Amsterdam. His work has been shown in many international solo and group exhibitions including The Autostrada Biennale in Kosovo; Muscle Memory at The Horse Hospital in London; The Hannah Ryggen Triennial in Trondheim; THE WHALE THAT WAS A SUBMARINE – Contemporary Positions from Albania and Kosovo at Ludwig Museum in Budapest; The Istanbul Biennal in Istanbul and Paper Vegetables at De Hallen in Haarlem.