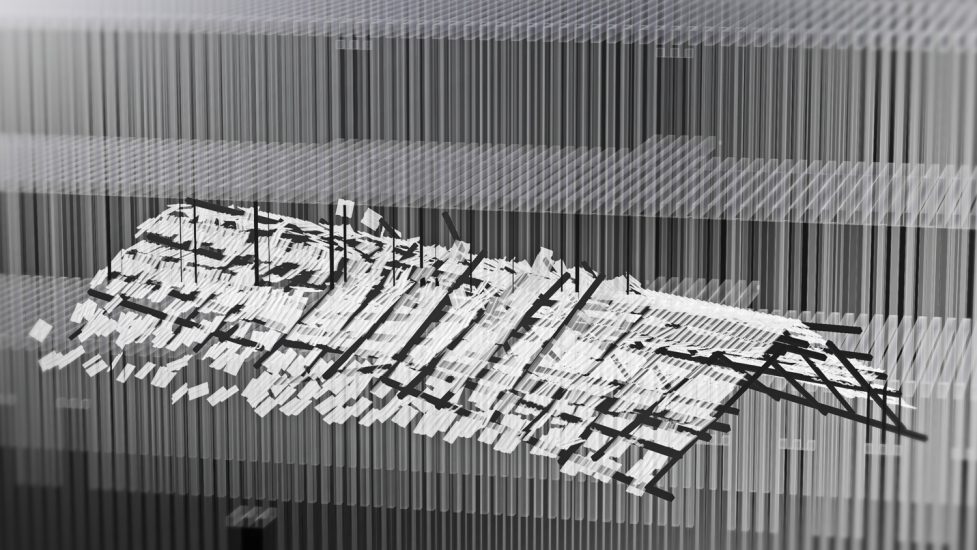 ROZENSTRAAT is pleased to present Never Again, a new project by Elisa Caldana conceived as part of the cycle Topography of Terror initiated in 2017 in dialogue with the artist Diego Tonus. Focusing on ways of constructing information in contemporary journalism, the cycle Topography of Terror articulates a reflection on the role and the value of images as tools to perpetrate terror and manipulate our perception of reality. Never Again is a new silent film and a continuation of the first film of the cycle, Topography of Terror (19.12.2016). On this occasion, the two films will be shown together in a two-channel installation specifically conceived for a dedicated space at ROZENSTRAAT.

Both films are set in the never-realised building for “Topographie des Terrors” Foundation in Berlin, originally conceived by Swiss architect Peter Zumthor as a Documentation Centre, located on the site of buildings that during the Nazi regime were the headquarters of the Gestapo and the SS. A key aspect of the films installation is the virtual empty space of the non-existing building, which is filled with the voiceover of the main character – performed by actor and activist Khalid Abdalla – recounting a moment in the life of a journalist affected by secondary traumatic stress disorder caused by overexposure to violent imagery in the newsroom.

Adding a new element into the virtual scenery, the silent film Never Again investigates with camera movements the first iconic building, deprived of its colours and material references, as if to deconstruct the essence of a voiceless character. It further contemplates the empty spaces through the impossible juxtaposition of a second architectural ghost, which originally occupied the same ground but in a different historical period.

The project Never Again has been made possible thanks to the support of the Italian Council (7th Edition, 2019), program to promote Italian contemporary art in the world by the Directorate-General for Contemporary Creativity of the Italian Ministry of Cultural Heritage and Activities and Tourism. Never Again will be shown at the Zilkha Auditorium at Whitechapel Gallery, London (2020). A new publication will be realized with Mousse Publishing and the artwork will enter the permanent collection of the MAXXI – Museo nazionale delle arti del XXI secolo (Rome). The book – supported by the Hessische Kulturstiftung among others – will be available at the in-house bookstore San Serriffe and will be presented at a book launch soon after the exhibition period at ROZENSTRAAT.

Elisa Caldana (1986, Italy) is an artist working primarily with sculpture, performance, film, and writing. Architecture, public spaces, monuments, and collective identity are recurrent themes within her work. Her work has been exhibited at the Tokas Hongo, Tokyo (2019); MAMbo Museum, Bologna (2018); ar/ge kunst, Bozen’s Kunstverein (2017); Sandretto Re Rebaudengo Foundation, Turin (2016); MMK, Frankfurt (2013). In 2020, she is a new participant at the Van Eyck, Maastricht.