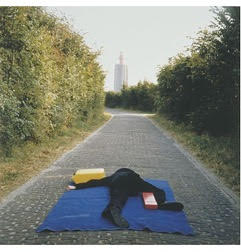 On Sunday July 28 from 1 pm, Marion van Wijk and Koos Dalstra will host an afternoon around the life and practice of Bas Jan Ader. They will talk about their research, will show some rarly shown video’s and get more in detail about Ader’s stay in Amsterdam in the summer of 1971. Afterwards there will be a screening of ‘Here is Always Somewhere Else (2007) a documentary about Bas Jan Ader by René Daalder.

About the speakers:
For the last 25 years Marion van Wijk and Koos Dalstra have been working on a broad research around Bas Jan Ader for which they talked with the artist’s family, friends and collegues. They also spoke to curators, art historians and other persons who played an important role in Ader’s life. vW&D published several books around the life and practice of one of most well known Dutch artists, most recently Bas Jan Ader: Discovery File 143/76 (2017)

Funny fact: for more as 35 years Marion lived few houses from where is now our space, so most of vW&D’s research actually took it’s start at our beloved street.