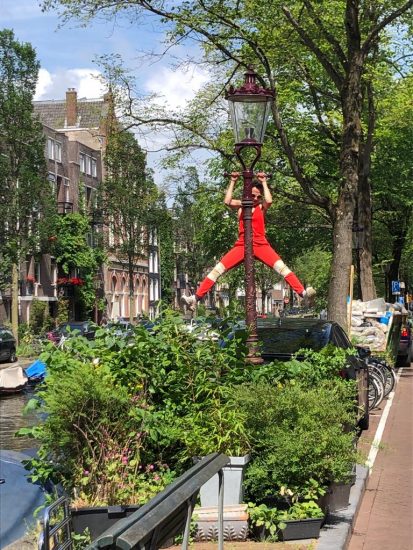 Women have fought several times in history for the rights of the working class, despite the engendered assumption that they had no contribution to society besides their capacity -and often the obligation- to procreate. During critical situations such as wars and famines where the scarce resources were distributed to the ‘productive’ part of the population, the Jordanese women stood up collectively and plundered food supplies in order to feed their families. The resulting jolt was an encouraging example of intersectional solidarity and care for the part of the population facing repression and lack of social justice.

With a focus on the Potato Riots (Aardappeloproer) in 1917 which this week marks its 105th anniversary, the work of Mercedes Azpilicueta takes the form of a walk in the public space, and more specifically the neighbourhood of the Jordaan. The performative walks rehearse, reenact and reenhance the intimacy and support within such movements and, seen through today’s feminist struggles, reflect on the following questions: what are the affective elements lying underneath these events, if we consider that tenderness and vulnerability can thrive alongside these militant commitments?* How did household economies evolve since then and what has been the role of the public space in it? Taking these considerations as a starting point, the walks unfold through a sequence of embodied material (infra)structures such as the disappearing Gangen (passages), barricades and bridges, but also self made domestic tools, aprons and carrier bags. Woven together in Onze Roeping, on Joyful Militancy they activate hidden sites and secret relationships with the city’s history and architecture.

Onze Roeping, on Joyful Militancy was initiated by Mercedes Azpilicueta and ROZENSTRAAT-curator Sjoerd Kloosterhuis in 2019.

Mercedes Azpilicueta is a visual and performance artist from Buenos Aires living and working in Amsterdam. Her artistic practice gathers various characters from the past and the present who address the vulnerable or collective body from a decolonial feminist perspective. In fluid, associative connections she counters rigid narratives of history in an attempt to dismantle them and make room for the affective and dissident voices to emerge. She was an artist in residence at the Rijksakademie van Beeldende Kunsten, Amsterdam in 2015-16, and received the Pernod Ricard Fellowship in 2017. Solo exhibitions include Gasworks, London (2021), CAC Brétigny, Brétigny-sur-Orge (2021); Museion, Bolzano/Bozen (2020); Van Abbemuseum, Eindhoven (2019); CentroCentro, Madrid (2019); and MAMBA, Buenos Aires (2018). Her work has been featured at Villa Vassilieff, Paris; REDCAT Gallery, Los Angeles; MACBA, Barcelona (all 2018); CA2M, Móstoles (2017); Onomatopee, Eindhoven (2016); TENT, Rotterdam (2015); and the Irish Museum of Modern Art, Dublin (2014).  In 2021 Azpilicueta was nominated for the Prix de Rome 2021.

Antonella Fittipaldi, is a South Italian performer, dancer and choreographer based in Amsterdam. She graduated in choreography at SNDO, in Amsterdam, and in Philosophy at the Università Statale of Milan. Her research concerns the representation of feminine bodies with voices and vice versa, in public and private spaces. Her work reflects on the relation between bodies/voices and architecture of cities and villages, channeling anarchist waves of collective impromptu acts of feminine languages and narratives, through streets, theaters and unconventional place

Marina Orlova is a  Russian choreographer and dancer  with a background in social studies. She has been practicing dance and making performances since 2012 and has graduated from SNDO at Amsterdam Academy of Theatre and Dance. Marina works with choreographic algorithms for bodies and interactions, absurdism, language and the edge between understanding and misunderstanding. Her current artistic research brings together four domains: dance, mental health, AI and geopolitics.

Toni Steffens  studied in dance in Cologne and choreography in Amsterdam (SNDO at Amsterdam Academy of Theatre and Dance). Between spectatorship and material, Toni’s approach to performing arts is always highly subjective or “subobjective” and navigates ethical and political concerns through the use of senses, perception and emotions. Toni’s work was supported and presented at Les Urbaines Festival, Veem House for Performance, 8 Athens, Flam Festival, Tanzhaus NRW, NB projects, Batard Festival, Workspace Brussels and more.

Thanks to Amsterdams Fonds voor de Kunst and Stichting Stokroos