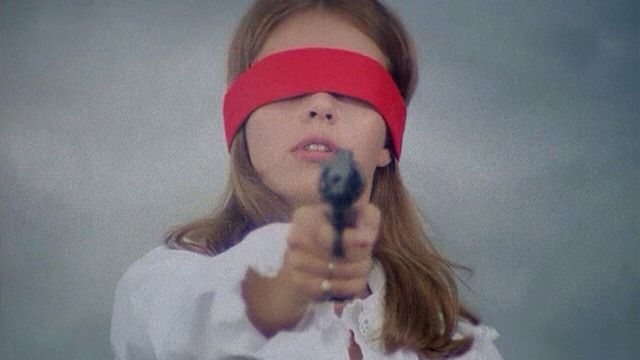 The film starts at 5pm

Welcome to the surreal world of Alain Robbe-Grillet, haunting images of shattered beauty, sado-masochism, poetry, and subversion. For Robbe-Grillet it is impossible to enter the realm of the imagination through the normal rules of filmmaking. His films always have a storyline which establishes a theme and its characters, but as it progresses the story becomes more and more loose until it splinters into another world of perception.
This flick is a French-Czechoslovak production, and it seems to me that the director was always sympathetic to the former Eastern bloc, not for political reasons, but because it represented a phantom continent where people thought and acted and dreamed differently than in the so-called West. The story of this film follows some bored students who hang out in a weird café called Eden. One day they meet a Dutch man who offers them another possibility than school and lessons. He invites them to an event, but when they arrive they find him dead. That’s the beginning of this movie which focuses on the students as they follow the trail of this man’s origins, which lead them to the Tunisian island of Djerba. And the more they attempt to uncover the truth, the more hallucinogenic everything becomes.
Visually stunning, the trip becomes an Alice-in-Wonderland journey for adults, a psycho-sexual maze, a mirror opposite to our conservative consumer society. The images are as stunning as anything in Jodorowsky’s films, but the storyline here is more warped and deranged and almost Lynchian in its multiple layers and obscure origins. The exotic locales and mysterious encounters multiply as this outlandish film unravels, including the kidnapping of a white European girl by Arabs. Cryptic, transgressive, sexy, and inspired by the atonal music of Arnold Schoenberg’s twelve-tone compositions! Hard art meets cinema.