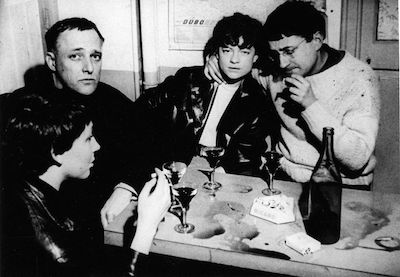 This is my personal favourite of all Guy Debord’s films. For this movie he didn’t shoot a frame himself, he only uses stills and clips from other films. But in doing so, with the simplest of means, he constructs one of the grandest of all narratives: the collapse of the modern world. The title is a Latin palindrome that translates as “We Go Round and Round in the Night and Are Consumed by Fire.” Some have compared this phrase to moths swirling around a candle before burning in the flame to which it is drawn.

The film is like an essay with typical Debord cold-blooded fascination, but it is also a Situationist poem. It is the most autobiographical of his works, with intimacy matching his analysis. He describes Paris of the 50s as “a city that was then so beautiful that many people preferred to be poor there rather than rich anywhere else.” This ‘anti-film’ certainly has a melancholic edge, with aerial views of an older Paris, panning shots of a nocturnal Les Halles market now long gone. We see ferocious faces now extinct, cafes and neighbourhoods that are now ghosts. We see frozen images of the bar Moineau, were his gang once haunted. On the soundtrack we hear his memories of “the charming hooligans and proud young women I hung out with in those shady dives.” He continues “Each of us had more drinks every day than the number of lies told by a labor union during an entire wildcat strike.”

On one level one could almost see it as a family album of rough-edged photos, but one with a deep philosophical and sociological bent – because it is also a critique against our raging consumer society. He analyzes our world of consumption and alienation, of the spectacle that makes us passive, comparing it to a modern form of slavery.  He says at one point “It’s a beautiful moment when an assault against the world order is set in motion.”
This little manifesto-poem-essay flick is rarely seen these days, but I think it’s a totally unique gem.