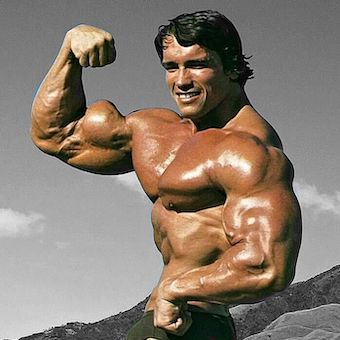 Please feel free to join! Within the context of our current exhibition The Young Man as a Moviestar by Bart Groenendaal, Jeffrey Babcock presents Pumping Iron, of which he says the following:

Well, a few years ago Arnold Schwarzenegger was in the news. It seems he was secretly screwing his housemaid for the last 20 years… and she even became pregnant and was raising the kid right in the same house as his family without them knowing about it!  Since a newspaper broke the story he had to tell the truth, so in a pathetic display of guilt and confessed sin, he repented in public. Personally, I always find the display of these Hollywood types confessing to their sins in such a puritanical way much more creepy than the so-called crime they committed in the first place!

The first time I ever heard and saw Arnold was back in the 70s in this documentary about some body-building schmuck from Austria, way before he was ever a film star (let alone a politician). As amateur and professional bodybuilders prepare for the 1975 Mr. Olympia and Mr. Universe contests, this film interviews them about their aspirations… centering on Arnold more than anyone else. It’s an incredible look into the weird world of misguided masculinity.

In this film Arnie comes off like a jerk with a lot of charisma more than anything else. He says revealing things like: “I was always dreaming about very powerful people. Dictators and things like that. I was just always impressed by people who could be remembered for hundreds of years.” This is a great film to see with an audience, especially in light of Arnold’s later stardom…  entering the world and mind-set of these bodybuilder types who have nothing more to think about than their huge muscles. On top of al this, all these bizzare images of bodybuilders are put to what seems to be a cheap softcore sex muisc soundtrack, making everything seem even more sleasy.

“What possesses these men to torture their bodies for the sake of an ostensibly silly concept—packing bizarre amounts of swollen, vein-popping sinew onto their bodies so they can stand nearly naked in front of screaming audiences and be gawked at like poultry hanging in the butcher’s window? The answer, we learn, is a Freudian goulash of narcissism, self-validation, and machismo gone haywire. Schwarzenegger in particular is fueled by the drive to escape the surly bonds of his homeland for the bright lights and glamour he envisioned as the American dream.“