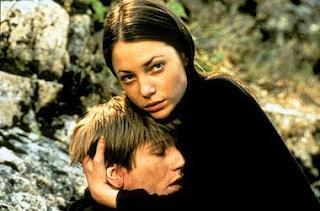 “Renegade director Jean-Claude Brisseau (Celine, Noce blanche) was always a lone wolf. His films never fit in the boxes, always creeping up like ‘flowers of evil’ between the cracks of the cinema industry. They can have a hard-edged urban social aspect, but they can also have a kind of weird spirituality that borders on supernaturalism. A really bizarre mix.

This flick is about a guy living in the suburbs of St-Etienne, whose life is smashed when his wife decides enough is enough and dumps him. This throws him into a catharsis, and leads him to radically change the course of his life. He becomes a kind of modern day Robin Hood, robbing banks to give the money to the poor, until something enters his life in the form of a mysterious man named Maguette (a brilliant performance by Emile Abossolo M’Bo) the son of an African king who juggles with occult amulets as easily as with computers. Like this eclectic Maguette character, director Brisseau himself is a guy who believes hard science is only one side of the story, and his movies opt for in-between worlds. After this meeting, the film takes off from there with many twists and turns, mixing surrealism, drama and black humor. In some ways it is a metaphysical road journey, attempting to find a way to combine benevolence with revolutionary aims. Many actions our main characters take make a spoof of the conventions and superstitions that hold our modern society together. This film is totally off-beat. Like I said it works on the level of black humor, but does manage to reach a state of grace at times. In some ways, Brisseau traverses similar ground as the Chilean director Alejandro Jodorowsky—combining public intervention with a spiritual kick…. but how each of them achieve this is totally different. A very strange adventure, and totally unique.”