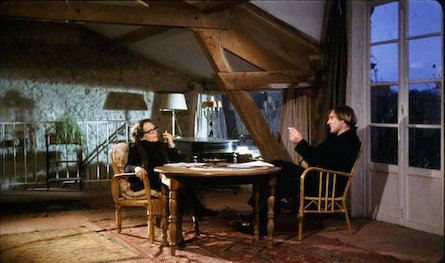 LE CAMION, 1977
(The Lorry or The Truck)
Directed by Marguerite Duras
80 minutes
In French with English subtitles

This is certainly not one of the easiest films I have ever programmed, but remains one of the most crucial. Directed by French writer Marguerite Duras, it is a movie that reflects the spiritual death of the 1960s, as France moved into the late 70s – the death of dreams. A world of dead-ends. This flick fits our pandemic world like a glove.

It is a desolate film, about the lack of real alternatives in the world. It is so sincere in the message it is conveying, it is almost an anti-movie. It reveals cinema as being dried up, and Duras positions herself as the polar opposite of the cinema of spectacles and gimmicks and cheap thrills and entertainment. Don’t expect any of that. We enter a world that is empty and dark as our city streets during the pandemic. It has an ‘end of the world’ feel. But for Duras the end of the world won’t happen with brimstone and fire, but already happened when we lost our sense of humanity and poetry. When we succumbed to alienation and consumerism, we allowed everything to become banal.

Like I said, this flick has discarded all the frills, all the decoration. Instead it demands a discussion. Much of the time is spent with Duras herself sitting at a table chatting with a pensive Gerard Depardieu (yep, the famous actor Depardieu, but this was made before anyone knew who he was). They talk about the ideas behind the film, about the characters, about the state of the modern world. In this film, everything is questioned, uprooted and re-invented, even how we see and experience cinema.

It remains important, and in many ways outlines our current situation. As culture critic Mark Fisher says, since the turn of the century there has been no new kind of music, politics, or cinema. All there is is tinkering with scraps from the past. When we decided to kill off all alternatives, we also lost our spirit of creativity, and replaced it with marketing, consumerism and a spirit-killing comfort. Duras saw it coming, and said it clearly in this movie way back in the 1970s.

Female visual-performance artist Export has been exploring the possibilities and borders of the body for the last 50 years. In this short film she tosses an open letter to us to find a new way to feel and move. Especially in a densely consumer-based society like ours, everything we experience everyday becomes deadlocked, dulled and mundane. Here Valie wants to create a new sensation of the body, unleashing a myriad of different variations, opening up the body and how we see it.