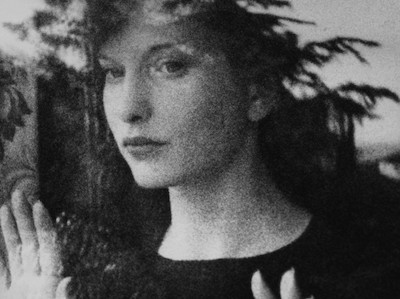 The great Jeffrey Babcock is back with his spectacular underground cinema’s. Also this time he picked an almost forgotten gem with a link to the exhibition Frenemy bij Josefin Arnell and Margaret Haines.

One critic described independent filmmaker/dancer/artist Maya Deren as “Fellini and Bergman wrapped in one gloriously possessed body.” And indeed she lived her life with the intensity of someone who was possessed. She is probably the most important and innovative avant-garde filmmaker in the history of American cinema, along with Stan Brakhage as a close second. Although her films have been screened religiously in underground cinemas over the decades, not many know the story of her life, which is what this film sets out to unfold.

In the 1940s and ’50s, Maya Deren made a series of mesmerizing short films, such as At Land, Ritual in Transfigured Time, and her cult masterpiece, Meshes of the Afternoon. She was a Russian immigrant from Kiev (yes, Ukraine was part of Russia) who was far more free than the society she discovered when she landed in America. Her name at this point was Елеоно́ра Деренко́вська, which was anglicized to Maya Deren.

Using excerpts from her experimental/poetic films as a starting-point, this documentary interweaves archival footage with interviews (with Stan Brakhage, Jonas Mekas, etc) to tell the story of this fierce, amazing woman. An artist that was always driven, who knocked out incredibly  new paths, and confronted narrow-mindedness with imagination. This film goes through the details of her extraordinary life, from committed socialist to experimental artist to her predilection for Voodoo. The imagery and details are all set to an original score by John Zorn.

“Recommended to anyone interested in dance, alternative cinema, strong women, and ecstatic imagery.”