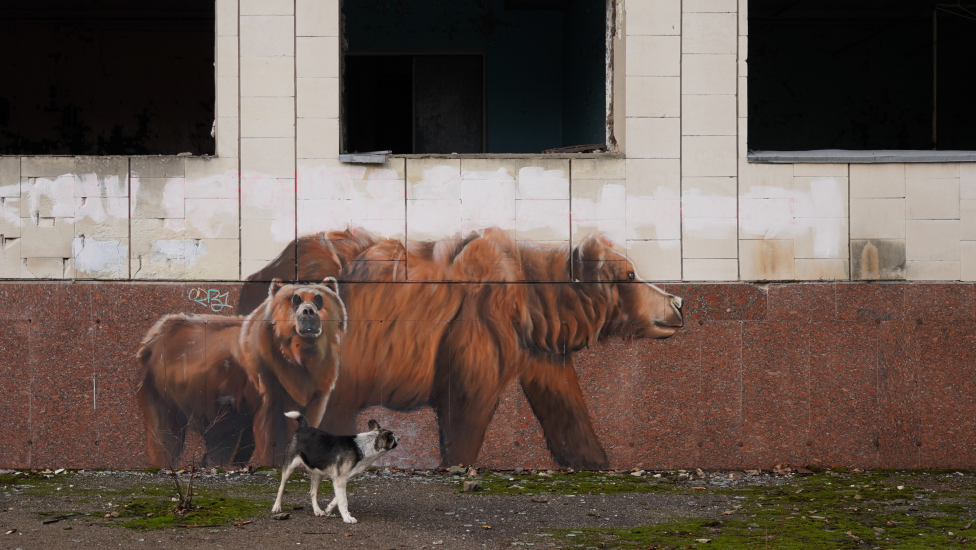 In solidarity with the people of Ukraine, we are supporting the campaign #ArtForUkraine

Rozenstraat invited the Hague-based Ukrainian designer, artist, and photographer Karolina Uskakovych to present her photo series ‘The Dogs That Survived’ / ‘Собаки Що Вижили’. This series emerged in collaboration with Nikita Zarkh, Boris Krichevsky, and Jonathon Turnbull, with whom she is working with on a film project in the Chornobyl Exclusion Zone.

Prints from this series will be for sale, starting this Sunday 6th March at 3pm.

In attempt to stop the spread of radiation after the 1986 Chornobyl nuclear disaster, Soviet soldiers were tasked with shooting thousands of dogs that were abandoned by residents evacuating the Exclusion Zone. The dogs that survived were left to face a harsh new reality. Without humans, hunger and wolf predation became the greatest threats to their existence. Devolving from domestication, the strays formed into packs.

The Zone is a strange place. There is an eeriness to its abandonment and overgrowth. At the same time, the Zone is experiencing a sort of rebirth, as humans cultivate it anew in an attempt to commercialise its uncanny beauty for tourism. Through the eyes of the dogs, the main observers of this change, we aim to capture the feeling of the Zone, the delicate balance between its natural power and new human agenda, and to let The Zone and its more-than-human inhabitants speak.

These images are from Собаки що Вижили (The Dogs that Survived), a film project by Nikita Zarkh, Boris Krichevsky, Karolina Uskakovych, and Jonathon Turnbull. Over the last year, the team regularly visited the Zone to spend time with the dogs and their human carers, including power plant workers, checkpoint guards, and residents of the Zone that never left. The black and white images capture the eeriness of the Zone while the colour ones signal its new life. The Russian Federation are now illegally occupying the Zone.

All proceeds of this sale will go directly to humanitarian aid groups on the ground in Ukraine.