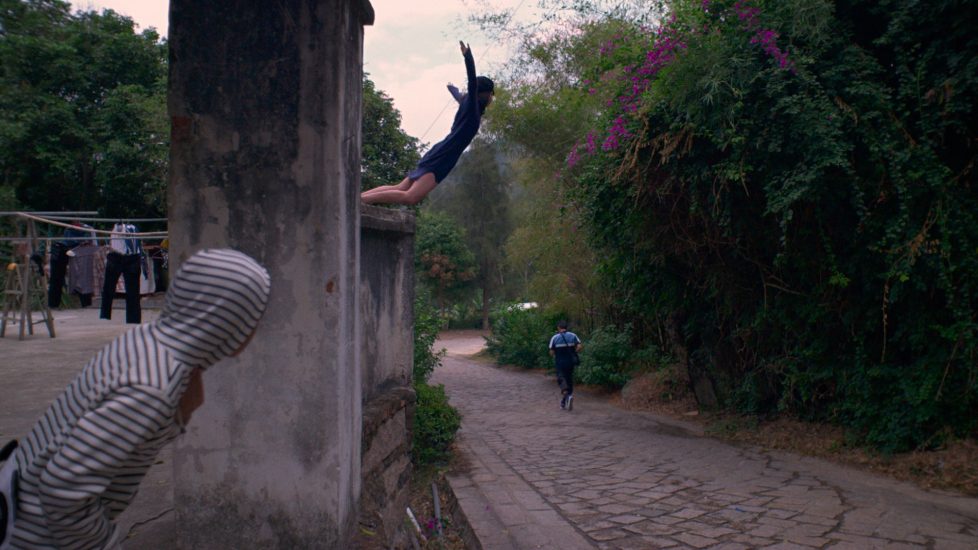 Beyond Index follows its own artistic rules and creates a narrative in-which actors and real people alternate with each other, and different actors are playing the same roles. It can be read as an essay about art students, Yves Klein, the colour blue, air pollution and neo-colonialism, as well it’s also a trance-image collage, set to the music of Berlin based deep house duo Âme. Just as that you can watch the film as a travelogue cross economic superpower China; a meditation on capital and utopia.

Using art historical references the film follows a group of Chinese art students in a painting factory on the precise imitation of classic paintings from the Western canon. The strict adherence to tradition shifts with the arrival of Yves- both a character and a drug. Slowly intoxicated by Yves (Klein) word’s, and the mind-altering colour blue, the students undergo an awakening and begin to consider an alternative less polluted reality.

At such a time as now, in which it is apparent that art is implicated in regimes of social control and the production of capital- when even artistic critique has become an important element of capitalist productivity, Beyond Index seeks to question whether it is possible for art to subvert in the manner of Yves. Can art be called upon to undermine, or even destabilize the regimes of neoliberal capitalism? Can it be called upon to awaken spectators from passivity?

Unlike the film, the video installation doesn’t follow a well-defined script. The artist deliberately opts for an associative structure in which visitors can form their own story. A structure that also gives him more freedom in creating a broader narrative. It contains new material, which originally didn’t make it to the film, and scenes are more elaborate or even brought back to their real-time recording. The adjusted piece not only gives the viewer a more contemplative role, it also reinforces the autonomous qualities of the work, making it a valuable addition to the original feature film released in 2017.

About the artist
Gerald van der Kaap (1959) is an Amsterdam-based artist, photographer and VJ, who is regarded as one of the true pioneers Dutch new media art. His work has been subject of numerous exhibitions including two solo shows at Stedelijk Museum, Amsterdam; Tate Modern, London; Art Institute, Chicago; Centre Pompidou, Paris; Museum Ludwig, Cologne and Guangdong Museum of Art, Guangdong.

The different aspects of Van der Kaap’s practice are manifested through his various presentations. Next his institutional exhibitions he most recently was commissioned for a permanent installation at the metro station Europaplein in Amsterdam, and last October he continuously performed for nine hours as VJ alongside several DJ’s during the Amsterdam Dance Event.

Beyond Index was made in collaboration with the team of the well known director Jia Zhangke, Yu Lik-Wai and Joewi Verhoeven. The music is composed by the Berlin deephouse duo ÂME (Kristian Rädle & Frank Wiedemann).

The project has been generously supported by the Mondriaan Fund and Het Nederlands Filmfonds.