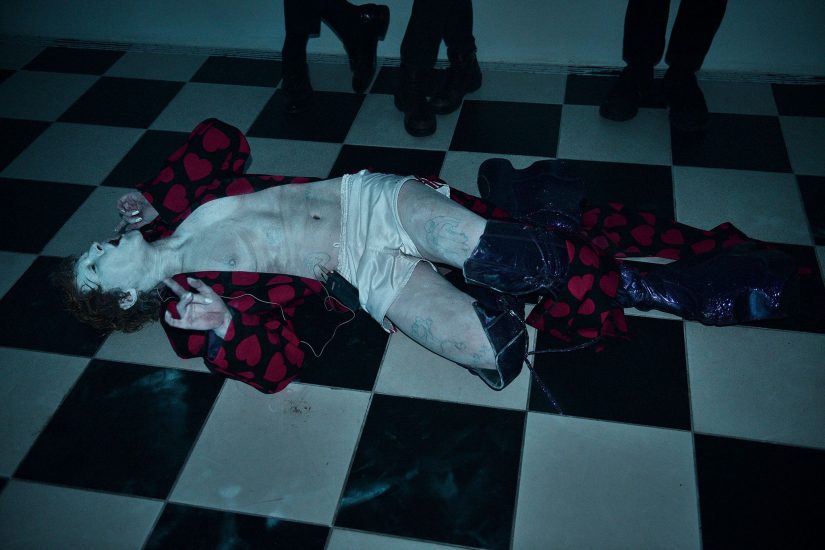 Join us next Thursday, 7pm for 4 performances by 4 amazing artists!

Mingrui Jiang, Raoni Muzho Saleh, Xenia Perek and Clara Saito are presenting works that link and contribute to themes of the exhibition Frenemy by Josefin Arnell and Margaret Haines.  It will be a night full of experiment, excitement and desire. All 4 artists are based in Amsterdam and  in different ways part of the local Queer Community.

Check our socials in the upcoming days for more information about each individual performance.

Tickets can be booked here!

Mingrui Jiang (1998, CN) is a currently studying at the Design Lab department of the Rietveld Academy in Amsterdam. She channels love, fear, instinct, desire and excitement to create an absurd world. Mingrui uses herself as an element, a movement, a fact to show and to experiment with different realities through which she wants to create a joyful chaos, an uncanny home, a positive tragedy, a serious joke. Next to her own practice Mingrui works as performer for Mire Lee and as such she will perform during the upcoming Venice Biennal. Just as that earlier this year she performed during Mire Lee’s exhibition at  Schinkel Pavillon in Berlin.

Raoni Muzho Saleh (1991 AFG/NL) is a choreographer/performer based in Amsterdam. He graduated from UvA, Bachelor in Literary and Cultural Analysis, in 2015 and from SNDO, Bachelor in Choreography, in 2019. His recent works are materializations of the seduction of the backspace which form both his conceptual brewing around strange relationalities and his movement practice of ‘becoming other’. Through the backspace he aims to provoke a dance in the direction of transformational multiplicity that aspires being freed from deeply ingrained algorithmic oppressions of solid subjectivity.

Clara Saito (1989, BR/CH) is a performance and visual artist based in Amsterdam. In each presentation the personalities and moods of Saito’s characters evolve as they are deeply connected to the current events and to the artist’s authentic experiences. In her recent works she transitions between different characters, such as the drag king persona Kurt Dickriot, a rockstar in performance arts called Lady Dada and/ or a dog called Diva, amongst others. These characters have been performing solo and together since 2017. Her work, in combination  with her life experiences became the base for her reflections on anarchism, practices of freedom and sustainable ways for living and creating. Clara Saito has been active since 2017 in the Amsterdam-run dance space Jacuzzi.

Xenia Perek (PL, 1993) is a performance artist. Originally from Poland, she is now based in Amsterdam where she has founded her work creating performance art pieces. Her pieces are devised from physical and mental scores located in galleries, theatres and night life venues. She uses live body with sensorial imagery for her medium, using her personal experiences of gender identity as content to create a theatrical narration. Her shows are live body-built momentums which can be seen separately or framed in photography. She surrounds herself by explicit stories, dreams, life situations and physical states termed as dynamic, instinctual material. Perek creates characters with various un/effectiveness and energy. She contextualises this in a socio-economical world as a quest for negotiations on how we live. Perek is a part of one of the oldest Amsterdam drag queen houses, the House of Hopelezz.