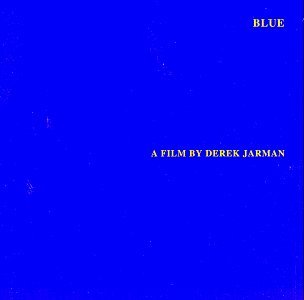 BLUE 1993
Directed by Derek Jarman
73 minutes
In English, no subtitles

At the end of his life, as he was dying from AIDS, the great British director Derek Jarman became blind. So for his last film, his swan song, he decided to make a movie that was visually totally blue, and he created a beautifully composed soundtrack to carry the narrative. And what a n incredible narrative it is – his intimate account of blindness, and slow death from his illness. The narration text is read aloud by some marvelous voices – including Tilda Swinton and John Quentin – who express the director’s thoughts, memories and meditations. These spoken reflections are mixed with a montage of sound effects and music.

This is the last masterpiece, in fact the last breath, of one of cinema’s visionaries. It remains one of his most exceptional movies, and it might sound strange to say this, but it needs to be seen on a big screen, engulfed in a void of blue.

Director John Waters said “I saw Blue in its opening week in New York, in 1993. There was a big sign outside the movie theatre that read, ‘Warning: this film is only the colour blue’. Talk about a marketing nightmare! People had flipped out and wanted their money back. Blue is as beautiful as a minimalist art piece. It’s hypnotising. You feel like you’re tripping after a while. Derek Jarman was going blind as he made it, and Blue was a beautiful, radical way to deal with dying from AIDS. Half of my friends died of AIDS in the 80s so it’s a tearjerker – but it’s not self-pitying. It’s smart, angry and very, very sad. Minimalist cinema is a small genre, but this would be the Rosebud of minimalist cinema. It’s extreme, and it completely defied the movie business. I felt Derek was a kindred spirit.”
This will be a high-def blue screening.