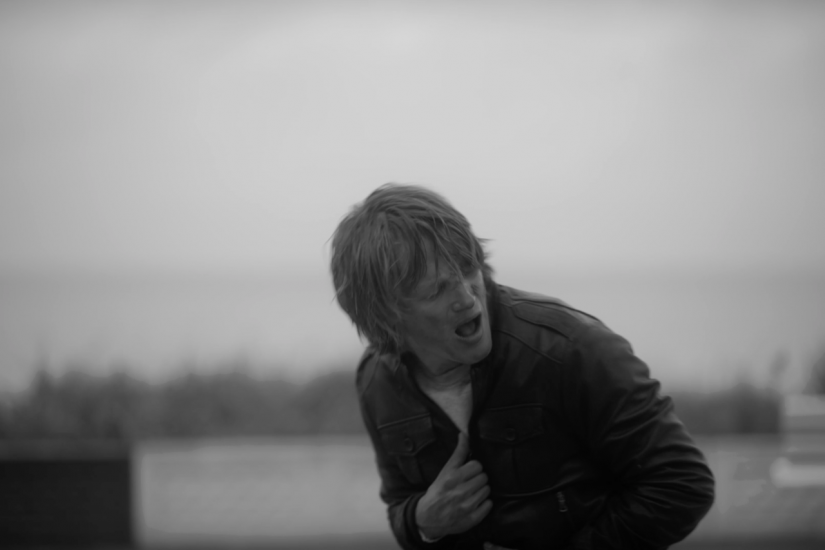 What does it mean to be a man these days? How do men experience and perform themselves, in a time in which the ‘idea of masculinity’ is so strongly subject to change? The Young Man as a Movie Star (Paranoia, Opulence, Perversion, Competition) is comprised of four narrative short films. They are screened simultaneously in the space on four separate screens with separate audio, inviting the spectator to move between four different feature films and to extract a personal experience from the gained impressions.

One by one, the films depict a variation on a troubled relationship between a young man and a mature woman. They are performing the role of two lovers, a hysterical housewife and a fleeing terrorist, a grieving mother and son and two fellow performers. In each story the position of the woman guides the man in the understanding and interpretation of his masculinity, or rather, of his masculinities.

The four films, played each time by the same two actors and shot in the same location, are inspired by the oeuvre of a 20th century male film director, for whom female-male relations form an important pillar in his work; Alfred Hitchcock, Jean-Luc Godard, Steven Spielberg and Lars von Trier. The films are shot in a specific style with a distinct narrative, tone and score. The gestures, actions, points of view and the situations in which the characters find themselves in the different stories, however, form a web of intersecting moments and references, which connect the films.

Starting and ending at different times, the films loop to repeat the cycle of interconnections with each round, allowing the viewer to drift at will between the screens and come up with their own interpretation. Paranoia, inspired by the oeuvre of Jean-Luc Godard, depicts a love affair between an older woman and a younger man, who spend an afternoon together. As the woman insinuates her husband might be spying on them, the young man becomes increasingly paranoid. In Opulence, a short film-noir inspired by Alfred Hitchcock’s work, the young man is a runaway terrorist wearing a bomb-vest, who ends up on the porch of a manic housewife who has just murdered her husband- hereby offering her a cynical possibility for escape. In Perversion, shot in dramatic widescreen and inspired by the work of Steven Spielberg, a mother’s frustration with the manner in which her son is coping with the death of his father, leads her to offer him weed and ecstasy until they both lose all control. In Competition, filmed with hand-held camerawork and inspired by the films of Lars von Trier, two colleague performers rehearse a dance piece on the beach, when the woman quits, only to claim she is exploited by the (absent) choreographer- who also happens to be the young man’s lover- and asks for the young man’s solidarity. The resulting inner conflict leads the young man to seek relief in self-harm.

The installation is not only an ode to cinema, but the four screens also offer a kaleidoscopic whole, in which image and dialogue correspond in different contexts. The consciously created distraction that arises in this way ensures that the viewer is detached from the principle of one dominant, central story that takes place on a single screen. The melodramatic fiction and black humor in the stories refer to the classic Freudian mechanisms that underlie cinema, while simultaneously disrupting them. In order to challenge the traditional patterns of behavior of the ‘young man’, it uses the ‘older woman’ as a messenger who – traveling through cinematic stereotypes such as mother, lover, colleague and housewife – acts on the mind of the young man, until he understands. Change is needed and his interpretation of masculinity can be a crucial factor in achieving this change.

Bart Groenendaal (1975) is an artist and filmmaker working in Amsterdam. He studied at the Gerrit Rietveld Academy and did a residency at the Rijksakademie. With his film and video work he questions cinema as a pillar of Western modernity, with its role models for the ‘free’ individual. He also makes drawings. Earlier video work has been shown at De Appel Arts Center in Amsterdam, Moderna Museet in Malmo and Center Pompidou in Paris.