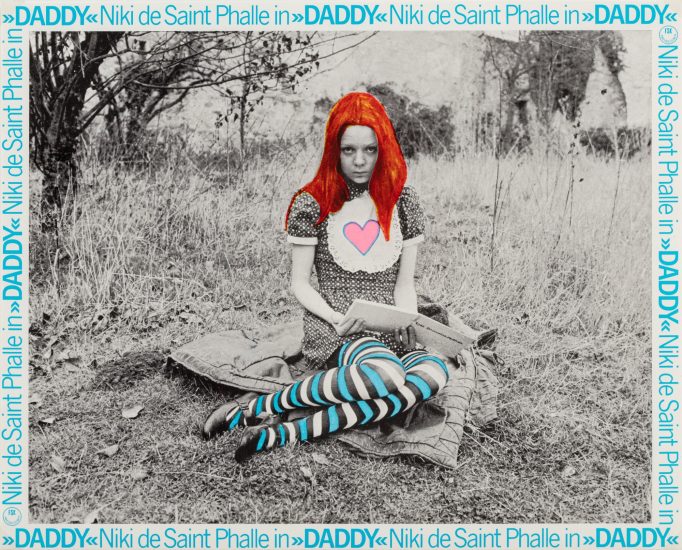 In the 1970s there was a lot of experimentation going on involving art and collective therapy. People would tap into their past personal history and re-create it in order to understand the roots of their problems. So in other words, after rebelling outwardly in demonstrations, they also began to fight internally to face their own demons. Believe it or not, we have blocked out a hell of a lot of the early experiences that influence our way of thinking and personality,especially events we would rather pretend never happened. When I met Alejandro Jodorowsky in Paris a decade ago, this was the kind of thing he was recommending to people to help them get over their
stumbling-blocks.

So when director Peter Whitehead wanted to make a documentary about the fiercely independent sculptress Niki de Saint Phalle and her art, she said “sure, but HERE’S the script” and derailed the film into a psycho-sexual mindfuck, targeting Niki De Saint Phalle’s relationship with her overbearing and abusive father. So what we get is an explosion of psychoanalytic emotions, memories, erotic taboos, fantasies, transgressive situations, and accusations – all aimed against the Law of the Father. Let’s put this in context… behind all this was the fact that when Niki was in her twenties, her father admitted in a letter to having raped her when she was eleven years old. She concluded “The Summer of Snakes was when my father, this banker, this aristocrat, put his cock in my mouth.” This film is her attempt to exorcise the influence of her domineering father, and rebel against a world created by daddies (including the entire art world).

So Niki returns to the chateau in the French countryside where she was raised. Scenes remembered and imagined are conjured up, as Niki recalls her childhood in a series of performance-adventures that include a huge phallus in a coffin, pubescent nuns stripping naked at an altar, scenes of masturbation, etc. There is no attempt to make these scenes polished or theatrical – they are meant to be raw and primal. At one point she imagines a confrontation with her dead father now that she’s an adult woman. It’s utterly bizarre. On the one hand it is a made-up fictional film, on the other it is a documentary of the psyche – both personal and collective. Scattered into these scenes we see Niki De Saint Phalle’s candy-colored art, along with her practice of painting by taking a rifle and shooting paint cans to make them explode.