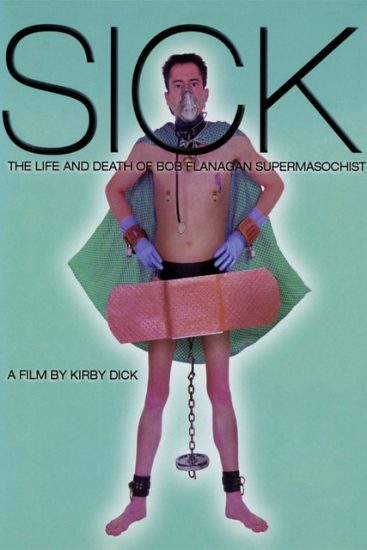 Join us this Sunday at 8pm for Jeffrey’s Cinema with ‘Sick: The Life and Death of Bob Flanagan (1997)’ by Kirby Dick.

This documentary about poet and performance artist Bob Flanagan who died at the age of 43 of cystic fibrosis. Because of the disease, which he was born with, his life was marked by constant unbearable pain from the very beginning (in fact doctors said that he would die in childhood). As he grew older and he didn’t die, the suffering only got worse, and he started to transform his pain into incredible performance art pieces. One of the things that strikes you right away about Flanagan is that he was a man who dealt with extreme pain and impending death with an amazing sense of humor, originality and bravery. This is a man with a real fighting spirit… and that’s actually what this film is about: Courage.

This is worlds apart from slick Hollywood cinema where violence is fake and glamorized. In SICK, the pain is real and you can’t forget it’s real because Bob can’t forget it. What’s more, he ends up piling more pain on top of his cystic fibrosis pain… after all, if you have to live with unbearable pain, one option is to do something even more painful, so when it’s over you are at least happy the pain is now less. And what’s also interesting in this film is that after watching his public art performances, we begin to see pain in our own lives in a different light.

Mind-blowing and heart-wrenching. Intimate and life-shattering. One of the best documentaries ever made. A must.

SICK: THE LIFE AND DEATH OF BOB FLANAGAN (1997)
Directed by Kirby Dick
86 minutes
In English with English subtitles