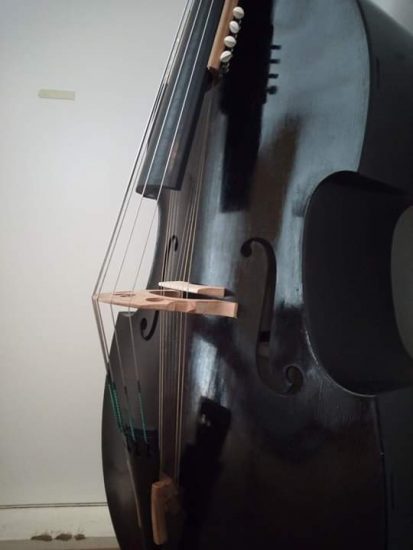 Extended Bass is a project that aims to further develop certain characteristics of the double bass. Added sympathetic strings amplify the natural resonance of the instrument, making it closer to Middle Eastern traditional instruments, while a micro-amplification system resonates all those secret components of sounds belonging to the world of tiny noises and also magnifies the harmonic components of the double bass.

This project is the result of a research period supported by the city of Amsterdam (Amsterdamse Fonds voor de Kunst).

Extended Bass presents two compositions: one is Calderone’s own, especially written for this set up, in which he explores the possibilities of this new instrument. The other composition is by Michael Pisaro. This composition has a connection with Gertrude Stein, to whom Brian Ferneyhough also dedicated a famous solo piece for doublebass. These two pieces are placed on opposite altars to show two radically different ways of conceiving virtuosity.

Notes on the pieces:

Dario Calderone: Modulazione I-II-III
In traditional harmony, modulation is the art that allows the musician to pass gradually from one tonality to the other. We look for common notes, which change relevance in the new tonality. Calderone was always fascinated by this attempt to “avoid the bump”, to bypass an abrupt transition. The artifice used in traditional harmony is one of reversal, which is to find a lingo, a note that has different meanings within different tonalities.

This idea of modulation was applied outside of the harmonic context, thus to a music in which the hierarchies between pitches are not more important than the balance of timbre and rhythm. Calderone decided to compose a small cycle of pieces for solo double bass, in order to elaborate a process that could further evolve from the concept of modulation. Modulation turned into the attempt to explore the maximum amount of dots which constitute an ideal line connecting two musical worlds, even the most contrasting ones. This way the attention is no longer on the arrival but on the journey in itself, and on the technique that smoothes out the cutting edges.

In Modulation I (Caleidoscopio) Calderone uses four completely independent parameters. Each of these vary their values separately, and the simultaneity of these variations generates soundscapes in constant change and constant modulation. If every parameter modulates, the sounding result is a hyper-modulation. The piece works like a kaleidoscope, in which the different segments of the view can rotate: each segment adds its filter to the global view of a single light. Therefore, the simple variation of a single parameter generates complex situations when combined with the others.

Modulation II (Lyra) is a study on rhythm. Via an exaggerated zoom-in, Calderone explores the modulation between a complex reiterated sound and a dry sound, a grain, which, when examined closer, also appears as a cluster of events. As the texture appears like grains, silences occur, functioning as the spaces that separate the matter. Lyra is the mighty instrument invented by Hermes and then given to Apollo. This is how one can imagine, like a playful exploration, the first notes played on this mighty instrument.

Modulation III (Cauda) is the natural consequence of the two previous compositions: a two-part counterpoint modulates via a moto obliquo technique in an ascending sequence. The resonance of the sympathetic strings modulates into the resonance of the normal strings, in rapid but minimal sequences, generating new harmonies each time. Together with the two preceding pieces, Cauda functions as a recapitulation, but with the fundamental difference of its verticality. The dyads in tremolo recall both the pitches of Modulation I and some rhythmical aspects of Modulation II, yet segmented and recomposed.

Michael Pisaro: No key but a possible movement

The emergence of melody from a collection of points and its disappearance in the fog of noise.
The language of melody, never fully articulated, with its source in a simultaneous background of harmony and noise. The piece takes its section titles from Jerome Rothenberg’s poem A VALENTINE, NO A VALEDICTORY FROM GERTRUDE STEIN. The nine section titles are, in fact, the complete
nine-line poem.

Dario Calderone studied double bass with Massimo Giorgi, Franco Petracchi and has been one of the few pupils of Stefano Scodanibbio. He is advocating new music since almost 20 years, having performed hundreds of new compositions for solo, chamber music and ensemble throughout major festivals of the world. His most interesting solo projects involve a rendering of the famous Voyage that never ends by Stefano Scodanibbio, a strict collaboration with Giorgio Netti on UR, 2 rites for solo double bass, and a specific research in micro-amplification for the live realization of his own compositions for double bass. He is member of MAZE, an ensemble for exploratory music based in Amsterdam, dealing with radical experimentations, medias, interactive scores and conceptual composition. He has recorded a number of CDs, but the one he likes most is where he assembles all the music by James Tenney that is playable on a bass: James Tenney: Bass works, Hat Hut Records.